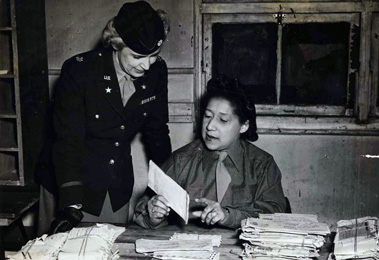 Alyce Dixon was feisty, independent, and brave. At 16 she changed the spelling of her first name to sound more theatrical, left home, and found a job. She divorced her only husband when he tried to stop her from financially helping her family (which included 9 brothers and sisters). She was one of the first African-American women to join the Army Women’s Army Corp (WAC ) during World War II; and belonged to the only African-American unit to serve overseas. She challenged unfair racial practices in the Pentagon secretarial pool after the war. She was invited to a private meeting with President Obama at the White House. And despite challenging health issues, maintained her goodwill, humor, and full hair and make-up until her death last week at 108 years old. Alyce was the nation’s oldest female World War II veteran.

You can learn more about her life in this Washington Post obituary:

Or listen to Alyce talk about her World War experiences in the WAC:

But even more fun is to get a sense of Alyce’s spunky personality from this clip of her telling jokes– at 105 years old!

Posted on February 4, 2016 by cindygueli in Lipstick Brigade

Check out my latest book!